In May 2018, I wrote a “call to the field” blog post about Mayra M. Perez Gonzalez, an evaluator in Puerto Rico, who had contacted NWI looking for more Spanish-language resources following Hurricane Maria. After that post appeared, we received a few responses from others who were also interested in Spanish-language materials.

One of those responses came from Otoniel “Tony” Calderon, a bilingual (Spanish and English) Wraparound Care Coordinator for Multnomah County Mental Health in Portland, Oregon. Multnomah County is the same county where I live, and where the NWI “headquarters” is located at Portland State University. I soon learned that Otoniel is a member of the Cultural Considerations Work Group (CCWG), a group of 15 multilingual and/or culturally-specific Wraparound practitioners here in Oregon, organized through the Systems of Care & Wraparound Initiative, also at Portland State. In the fall, I had the opportunity to join a CCWG meeting to speak with the members of the group and learn more about their work. 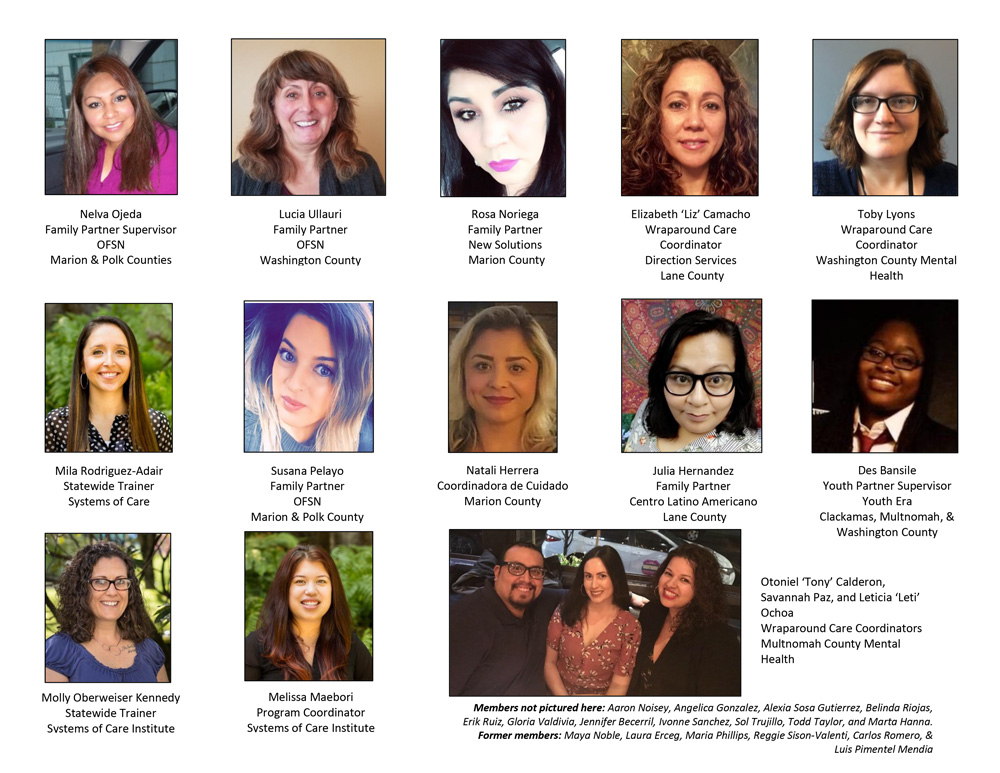 The CCWG began meeting in 2016, originally invited to provide culturally-specific consultation for the Oregon Wraparound Best Practices Guidelines. When the group began, individuals from 9 different counties and 11 agencies from across the state of Oregon were at the table. The CCWG members represented multiple cultures, including Mexican, Caribbean, Costa Rican, El Salvadorian, LGBTQ+, Latinx, African American, Japanese American, the Cherokee Nation of Oklahoma, and Jewish. The CCWG was very intentional about its work from the beginning. They used the Wraparound planning process to create team agreements, goals, and priorities to work on as a group.

The group’s translation process was a collaboration completed during monthly meetings and through email over the span of 14 months. It was important that the words chosen for the translations were youth- and family-friendly and easily understood by the majority of Spanish-speakers. In many cases there were lengthy discussions about a single word to ensure the end result would be culturally responsive across various Latin cultures. Instead of using the formal Spanish taught in school, CCWG wanted to make sure to use the same Spanish the families they work with speak at home.

The CCWG uses an equity lens to focus on racial, economic and social justice to analyze barriers being experienced by youth and families of color in Wraparound across the state of Oregon. Their focus encompasses all aspects of Wraparound practice, including hiring, retaining, and supervising culturally-specific Wraparound practitioners, and the organizational and systemic supports needed to provide culturally- and linguistically-responsive services to all youth and families.

In addition to completing translation of these Wraparound documents, the CCWG provided consultation on hiring and retaining bilingual and multicultural staff for the Oregon Wraparound Supervisors and Coaches Learning Collaborative. They are currently developing a survey to compare the work experiences, workloads, and needs of bilingual/multicultural Wraparound practitioners with those who are White/monolingual English-speaking to further inform the field. The group is also seeking potential funding options to continue their collaborative work.

Since its beginning, the group has been a source of support and knowledge sharing for its members. As Leti Ochoa, a member of the group and a Bilingual Wraparound Care Coordinator with Multnomah County Mental Health, described: “Spanish speakers are often an afterthought, but here at the CCWG they are at the forefront.” Group members report feeling validated, seen, understood and supported after attending the monthly CCWG meetings.

NWI recognizes the need for more materials in translation to Spanish and other languages and the importance of periodically reviewing and updating materials and translations to reflect the latest best practices and changes in language usage. NWI operates on a very small budget, but thanks to support from SAMHSA and NTTAC we’ve added to our Spanish-language materials. The Manual del usario del proceso de Wraparound (asistencia integral), the Spanish-language version of Wraparound Guide for Families has been updated, and we added Spanish-language versions of two other key documents from NWI: Conceptos basicos sobre Wraparound (asistencia integral) (Wraparound Basics), and Los diez principios del proceso de Wraparound (10 Principles of Wraparound).

I’m so glad the email request from Mayra M. Perez Gonzalez in Puerto Rico led me to the CCWG meeting, held in the same office building where I work so I could learn about this important work being done nearby.

For more information and to request copies of their translated materials for use in your work, contact the CCWG at culturallyresponsivelc@gmail.com. Here at NWI we’d love to hear from you about efforts to ensure Wraparound is culturally-responsive in your community, or if you just have thoughts and ideas on this important topic. Please add your comments below.