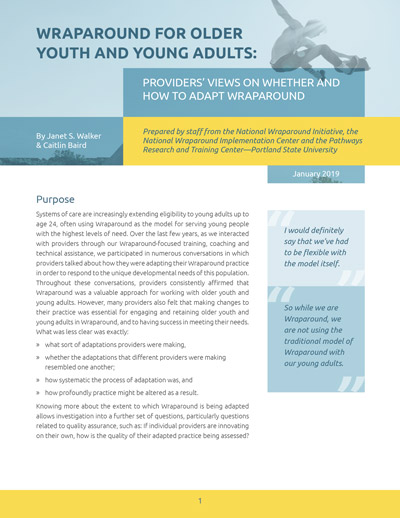 In mid-December, NWI and NWIC staff presented a webinar, and unveiled a new report, on adapting Wraparound for older youth and young adults. There were 660 registrants for the webinar, which provides an indication of interest in this topic. In the webinar, my colleague Caitlin Baird and I presented key findings from a qualitative research project that we had undertaken in the previous year. We wanted to explore Wraparound providers’ views on why and how they might change their practice when working with older youth and young adults. To do this, we sought out Wraparound programs and initiatives from across the nation that serve substantial numbers of young people over the age of 18. From these programs, we interviewed Wraparound facilitators and peer support providers involved in direct service to young adults, as well as managers of the programs. We wanted to address a series of questions, including these:

The webinar and report answer most of these questions. We did find that the adaptations being made across providers and programs strongly resembled each other, which made sense since the adaptations responded to developmental differences between young adults/older youth and younger children in Wraparound. We also found that while practice was adapted significantly, providers were mostly confident that the adapted practice nonetheless adhered to Wraparound principles and fidelity guidelines. However, providers were not so confident about some areas of practice, and wanted clarification, particularly regarding expectations for teams (e.g., membership and frequency of meeting) and timing (e.g., how the phases of Wraparound might look different for youth and young adults). Further, providers were looking for guidance around how to ensure fidelity when practice is adapted.

If you are interested in this topic, I encourage you to read the report and/or view the webinar. Staff at the NWI and NWIC have made plans to follow up on some of the issues described above. We plan to mobilize our experts and develop a learning community to aid us in creating specific guidance around fidelity expectations. This should happen in the Spring of 2019, with a guidance document coming out after that. We will be providing further training and technical assistance during the National Wraparound Implementation Academy in September, and hope to see you there. Rooms at the Academy hotel are going fast!