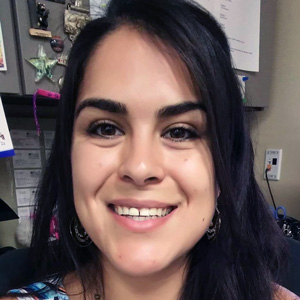 Gloria Cardona is a Wraparound parent partner, serving families in the mid-county region of Riverside County in Southern California. Her colleague, Miguel Moreno Lopez nominated Gloria for the NWI Spotlight because she has been an inspiration to him in his work as a clinician and Wraparound facilitator. “It’s her willingness to come in every day and learn and try something new, and to incorporate the values of Wraparound in everything she does. It inspires me to try as well, to think outside of the box”

Gloria started out as an office assistant with the Riverside University Health System Behavioral Health Mid-County Wraparound program, transitioning to the role of parent partner two years ago. She credits her ability to think creatively about how to work with families to her experiences as a single mother navigating systems for her own children, as well as her bilingual/bicultural background. To illustrate this, Gloria described some of her Wraparound work with a single father raising two children, each with high needs and challenging behavior. When the family came into Wraparound, Miguel said, the two children “had been hospitalized multiple times. They had tried all kinds of psychiatric medication and every type of service you can think of. The father was feeling completely defeated. He was not able to get enough sleep and was at the point where institutionalizing them seemed like the only option.”

At first, it was hard to know where to begin, but Gloria was persistent in working to understand the family’s needs. From her own background, she recognized in the father an expectation common in traditional Mexican culture, namely that a father is the person who is in charge of the family. In the family realm, the father is expected to know the answers and make the decisions. Little by little, Gloria began to understand how this made it difficult for him to listen to his children, and also to talk about his own needs. In one conversation with the father, Gloria described times when her own father had not allowed her to have her own voice, and how that was like “being kept in this little box.” While the father left the meeting angry, he came back to Gloria later and told her that he had taken what she had said into consideration, and that he was ready to open up his thinking.

With this foundation of trust established, the team was able to collaborate more effectively with the father, and to provide services and supports in ways that enabled him to continue working the night shift and get enough sleep during the day. What is more, his relationship with his children was transformed. Now, Gloria says, “they’re talking to each other. They didn’t used to go hug and kiss him, and now they’re doing the complete opposite, thanking him for the support, it’s amazing to watch!” Miguel describes how the father expressed gratitude to the team, saying, “You guys are amazing. Thank you for not being another program that just kind of turns the other way when the going gets rough.”